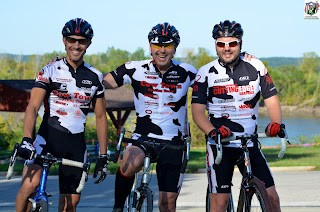 The course was on a bluff above the Missouri River and involved a lot of climbing with very little recovery. A fit racer would do well here, as it wasn’t very technical but required a lot of power to get up the hills on the out and back course. From the gun, the selection was made. The fast guys were at the front on the uphill start and the rest of us settled in to see what would happen. Damian went to the front and opened up a pretty nice 40+ second gap on the second place rider, so Chris and Dave assumed the vigilant domestique roles and held the field in check as the hilly course did not suit their current fitness levels. Damian handily won the race solo and secured Cow Town’s first victory of the 2011 cyclocross season. Congratulations to Damian on his victory and thanks to Brendan and Roger for putting on a fine event.

Some fine photos
Posted by Biker Dave at 10:01 AM