Our own Bob & Michael Tarne reviewed the Kuiat racks recently. Here is what they had to say about NV.....

My son and I took the Kuat NV on a recent trip to Arkansas to do some mountain biking before I dropped him off at college. The rack performed flawlessly and looked good to boot.

I have a 2 inch hitch on my car, and the rack mated up nicely. After get 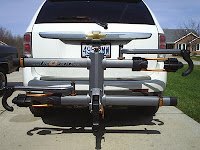 ting it in place, a few twists of the knob at the end of the rack gave it a nice tight fit. I’ve had other racks that bounce around; the tight fit of the Kuat was a nice change. The rack held our 2 full suspension bikes nicely. As we drove down the road, I found myself looking in the rear-view mirror just to make sure, but the bikes weren’t moving at all.

After we took our bike 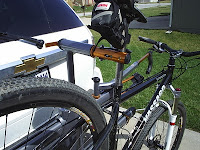 s off and stashed them in our hotel room, the rack folded up nicely as we headed off to dinner. I just had to remember I had an extra foot or so of length to my car as I was backing up.

The Trail Doc (repair stand attachment) also came in handy. After our first day of riding, my bike was not shifting right. In a matter of seconds, we put the attachment on and got my bike on so we could tweak my shifting. 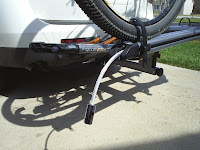 The NV even comes with an integrated cable lock which comes in handy to secure your bikes and takes away any worries if the bikes were left on during an extended meal or anything else taking you away from your car for a while.

Having used less expensive racks such as Thule, this seems much more solid. If you’re looking for a solid rack that works well with full suspension bikes, this is a winner. And while the rack only holds 2 bikes, Kuat is releasing an extension for 2 additional bikes. The NV is advertised as working well with downhill, free ride, or other large bikes.

The local Cyclocross season started with the KC Cup Cyclocross race. Held at Swope park on a very unique and challenging course that featured about 3/4 of a mile of single track, log crossings, miniature barriers, a long road section and plenty of twisty stuff to keep things interesting (if the log crossing in the single track did not do that for you...) 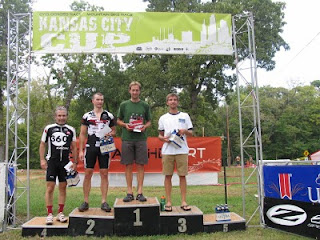 Chris Locke working hard trying to come back after a very poor start. 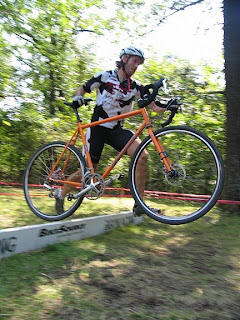 John Williams with some good form over the barriers. 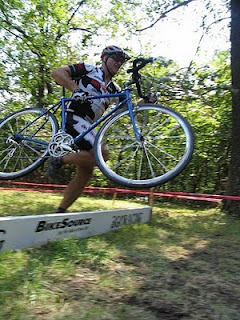 Tim Greene over the barriers given her hell
Posted by Cow Town at 6:21 AM No comments: 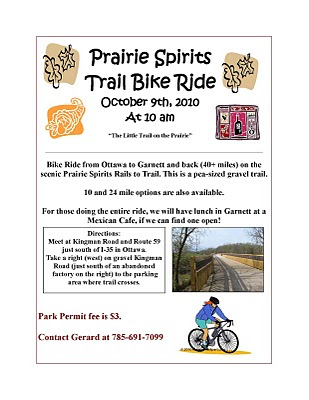 Traffic Skills 101 is an intensive, on-bike class designed to help you safely and confidently bike in traffic. The two-part series is on October 2nd and 9th.

Whether you are an aspiring bike commuter or a seasoned cyclist, this class will give you invaluable knowledge and practical bike handling skills. This is the first time Kansas City has seen this class in several years, so don\'t miss this great opportunity.

Space is limited, so sign up today at: http://mobikefed.org/civicrm/event/info?reset=1&id=7415

Traffic Skills 101 is offered by Eric Bunch, a Licensed Cycling Instructor with the Missouri Bicycle and Pedestrian Federation, a partner in the Car Free Challenge.
Posted by Cow Town at 7:10 AM No comments: