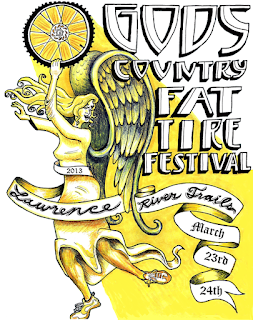 Spring is just around the corner and the 11th Annual God’s Country Fat Tire Festival is fast approaching. Off-road multisport events like Xterra triathlons and mud runs are rapidly growing.  These events are popular because many athletes enjoy the adventure and added challenges of running and biking on off-road trails.  Off-road events also tend to be friendlier and more “low-key” than their road counterparts.  They appeal to trail runners, mountain bikes and anyone who likes adventure and doesn’t mind getting dirty during a race.

Hurry and save...due to our recent winter weather, regular registration for the off-road Duathlon has been extended until 3/5/13.  This is also the date to guarantee an event t-shirt as we will be placing our order on that date.  Visit http://fattireduathlon.blogspot.com for a direct link to registration.

Are undecided about racing?   If you sign up early and can’t attend on race day, we can rollover your registration fee to next year or apply the fee to one of our other events on the calendar.  Now you can have peace of mind and not have to worry.  This guarantee is for both the Duathlon and our Mountain bike event.
Posted by dirtdobber at 1:29 PM No comments:

Posted by Biker Dave at 7:35 AM No comments: