I wanted to post this for my friend Joe and for all bicyclists out there on our roadways. On June 18th about 7:00 PM on N. Cherry leading out of NKC, a driver purposely struck Joe Pace while he was riding his bicycle. Joe was riding with Anne single file up N. Cherry, when they heard a motorist come up behind them blaring on his horn (this has happened to about all of us). Joe told Anne to just get as far over as she could, so the car could pass. The motorist came around Anne making sure he got as close as he could get to her and then purposely swerved into Joe, who was just a little farther up the road, striking him with the side of his car. Joe’s left arm and wrist took most of the impact, while the rest of his body slammed into the vehicle. Joe then crashed onto the street, hitting his hip and head on the pavement (he had a helmet on). The driver sped off, without knowing if he had seriously injured somebody or worse. Thank goodness Joe’s injuries are not life threatening and he is going to recover. There were witnesses who got a description of the car and the driver, but no license plate number. A police report was filed and a $500 reward is being offered for information leading to the arrest of this criminal.

Joe is having a bicycle rally at is Restaurant/Bar, Paci’s, on Saturday, June 27th at 7:00 AM. The rally will be covered by Channel 9 News. They are doing a cover story on the Heart of America Bridge and why the city should make bicycle lanes on it. Steve Mahoney interviewed Joe and Anne for the story and are hoping to use Joe’s story as a lead in to the Heart of America bike lane piece.

The address for Paci’s is 1825 Buchanan, NKC, MO. If you can make it on June 27th at 7:00 AM, that would be great. Hopefully we can help raise awareness that bicycles are out on the roads and we have just as much right to use the roads as cars do and maybe we can get the guy who hit Joe off the street, before he attacks another cyclist.
Posted by dirtdobber at 8:21 AM 1 comment:

MWFTS Race # 5 was held Sunday, June 7th in Columbia, Missouri. Cow town was respectfully represented by John Wagner, Garet Steinmetz and Sean Burns. Race day conditions were less than optimal with rain showers through the night/morning. The rain stopped and the trail drained fairly well, leaving some great singletrack riding with minimal slick rocks on what would prove to be a great and challenging course.

First off the line was the Expert Men. Garet’s start looked great and into the singletrack he disappeared. John and I then lined-up for the Single Speed event, and we were both in the top 5 heading into the woods.

The first 200 yards of singletrack was a downhill, rock covered slippery mess. I heard the rider behind me crash hard, taking out a few of the heard behind him. This allowed the top five positions to make a pretty good gap. Slowly the riders also made a pretty good gap in front of me, and I was alone having a great time, and finally passed by a couple strong riders just before the start of lap two. John was long gone by now, battling it out for a podium finish. I slowly fell into a state of ‘umm, I just bonked hard’ and was at the point were I had to literally stop and take a break, I was feeling pretty sick. A handul of riders passed me until I finally had the juice to get back in the saddle and finish the race.
The course was great and as usual, it was a good time had by everyone.

All said and done,

I've kept this report on-the-short, because you can read more about Garet’s race HERE and more about Sean's efforts HERE.

Official results are HERE.
Event Photos are HERE.
-Sean
Posted by Burnsey at 12:19 PM No comments:

Holler and Steinmetz On Top

Cow Town's Selby Holler continued his winning ways by taking the overall win at the BUMP N' Grind in the Cat 3 division. Held annually at the Oak Mountain State Park the event is hosted on a 10,000 acre facility and includes the famous 600 foot climb up Red This years event hit the big time as it was the 2nd round of the Kenda Cup East.

Check out a cool video of the event at BUMP site. 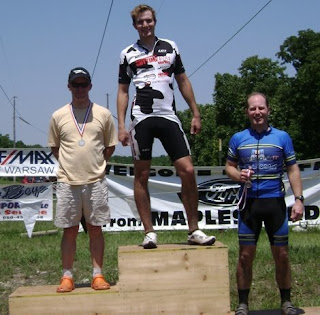 Closer to home, the first round of the Down and Dirty MTB Series was held in Warsaw, Missouri at the Truman Lake MTB Park. A challenging 7 mile course awaited everyone Sunday morning. In the Expert field, Cow Town Cycling's Garet Steinmetz took his first solo win of the year over Ebby Norman of Pro-Velo. Steinmetz suffered two flats, but still managed to get the better of the elder Norman.

Check out the race report on Riding Dirty Flying High

Next round of the Down and Dirty series is June 21st.
Posted by Cow Town at 1:26 PM No comments: