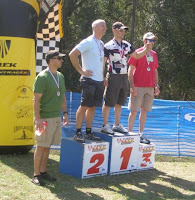 Great news from the boys down in Florida. Our own Selby Holler won the opening round of the AMBC (Southeastern Regional Series) series in Gainesville, Florida. The opening round was held at the very popular Haile's Trail and was promoted by our old friends Gone Riding

Selby was in a tight battle the entire event with two other riders who had distanced themselves from the 30 rider field. In the end it was his ability to HURT more than he thought he could and take the win over his rivals. "I plan on doing a lot more hurting" said Holler has he gets ready for a championship run.
Posted by dirtdobber at 6:04 PM

thats my boy give em hell selby i know your an animal i almost feel sorry for every body but thats life swartzanelson .