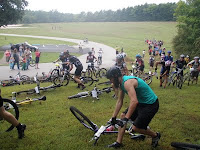 The 2nd annual Tall Oak Challenge MTB Race was a great success with over 120 racers showing up to race for 6 hours. Team Red Wheel did an awesome job of preparing the trails. Hat's off to them for all their hard work.

Overall team winners of the day were the Duo of Chris Ploch and Tom Albert who laid down 11 laps in 6:18. Second went to the team of Don Travis and Cameron Chambers. They kept it close, but had to settle for second on the day. The fight for third place was came down to the last lap. A nice battel between the "Flying Cows" and "Jimmy Leg". The team of Paul Kerwit and Pfremmer were able to chase down the team of Mike Classen and Garet Steinmetz on that final lap to take third wiht 10 laps.

Jeff Winkler and Karen Holtman were the overall 6 hour Solo winners on the day. Jeff put in another impressive ride lapping most of the solo field and finishing with 11 laps in 6:32.

Team Seagal was on hand. They have some pictures up and a nice report.
Posted by Cow Town at 5:49 AM